As an observation, there were many that would consider the ability to read minds quite impossible and to those I say – You’re dead right! What we are in fact reading is someone’s thoughts. It is our thoughts that have a physiological reaction on our faces and bodies and it is these details that betray our thoughts to those such as Holmes, who care to pay attention to them.

Few items are smaller, yet more significant than the eyes!

If we look at merely the lids and how they move, they can tell us a great deal about someone’s emotional state. If we look at some commonalities (that would change from person to person of course) of a blink rate at rest. This averages between 9-18 blinks per minute and even at rest would still alter further depending upon the cognitive tasks that were being undertaken. So for ourselves, as would-be sleuths we can look at the amount of times our subject blinks over 20 seconds and multiply that by 3 for an average. We have here, a visual link to their pulse! Metaphorically speaking of course.

It has been widely reported, and I shall include some links at the end of this article, that when someone’s stress levels increase and their cortisol levels grow that their blink rates would increase as well. Steadying increases would indicate a slow build of excitement whereas moments of eye lid flutters would be akin to those fear flashes we get when someone makes us jump and our pulse, for a moment, goes a little haywire. If we make note of these changes then we get a visual shift in the way someone’s internals alter when we read them in a given situation. For the business scenarios, low rates to high rates would indicate a waning sense of interest. This also aids in our learning of this as a skill as we no longer have numbers to compute in terms of their meaning. We know what a change in pulse rate would indicate and can therefore concentrate on its contextual applications.

The lower blink rates have been examined for dopamine generation which is built towards focus and memory work. Studies have shown that our rates can drop to as low as 4 per minute when reading. Stories are a great way to elicit this response. Think of how the journey method works after all.

If we finish in looking at the speed with which the lid open and shuts, having first compared this to the baseline of the movement and rate at rest during those same 20 seconds. Natural blinks work around the same speed as snapping ones fingers. Any slower and there is an element of forced control about this unconscious response and any quicker and we are looking into the realms of a fear response to whatever stigma set it off.

The controlled blink speed would suggest a blocking behaviour. Blocking is a term used to describe when a person wishes to distance themselves from Something they do not like. Blocking is a part of the fight or flight response, and takes the form of the flight element because it creates distance between things we wish to avoid.

This directly links to the flight behaviour when there is rapid continual blinking. Fear and Flight/Fight. So what we have here with these few simple observations is a link to read someone’s emotional shifts and when we put that into context of the scenarios that we exist in as the profiler in the room, these same observations can illuminate deceptive elements, interest, attraction, concentration, attention, memory, fear, emotional stress and actionable intent.

Just from these 2 simple observations within context of 20 seconds for a solid baseline.

The above is the neuroscientific profile of the work done into blink rates and dopamine.

To explore what life would be like through the eyes of Sherlock Holmes, get yours here. MX Publishing Link to get your own copy!

So here we understand that the eyes can be so much more than the windows to the soul.

Do stay in touch. 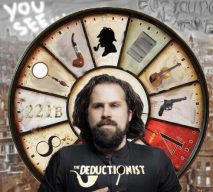